What next for Tottenham and Conte following North London Derby debacle?

"About the performance, I'm not disappointed." Try telling any Tottenham fan not to be disappointed about losing the North London Derby. To put it blunty, Spurs were awful in the first half against Arsenal, bar a couple of moments where they could have levelled matters through Son Heung-Min and Harry Kane. Yet, those chances were an exception to the rule at the Tottenham Hotspur Stadium.

Arsenal went in at the break two goals to the good following yet another calamitous Hugo Lloris mistake - more on him later - and a fine long range strike from Gunners skipper Martin Odegaard. Thomas Partey also struck the woodwork as Arsenal dominated. To their credit, Spurs showed great character to come out all guns blazing for the season half, and were it not for an inspired Aaron Ramsdale, they would have worked their way back into the game.

Yet once again, Spurs started slowly and needed Antonio Conte to kick them into gear to try and rescue a result. By then, it was too late. Defeat leaves Spurs 14 points behind Arsenal in the table, and with St. Totteringham's Day now edging ever closer, questions are really starting to be asked of Conte. When he was named as Nuno's successor in November 2021, supporters were relieved. Finally, a serial winner had rocked up at the Tottenham Hotspur Stadium!

The issue with Conte is that he wishes to surround himself with serial winners, and that isn't the way Spurs operate. The north London side haven't won a trophy since 2008, where they beat Chelsea to lift the League Cup, and it's looking unlikely that drought will be over anytime soon, especially with the weak mentality of the squad.

It wasn't supposed to be this way with Spurs either. Conte was the man tasked with ridding Spurs of the 'Spursy' tag, and yet they have been as error prone as ever. They have committed more errors leading to an opposition goal (5) than any other Premier League team this season. Three of those have been by Lloris, who scored his first own goal of the campaign against Arsenal. Bukayo Saka's driven cross took a deflection, hit Lloris in the chest, and despite the Frenchman's best efforts, the ball bounced over the line.

On the pitch at least then the problem does start from the back, and specifically Lloris. 12 months' ago, Lloris put pen to paper on a new deal that expires next summer. That gave Spurs breathing room in their quest to sign his successor, all the while rewarding the Frenchman for his years of service. In the last year, though, the 36-year-old has started to show his age. While superb for France in Qatar, the 2018 World Cup winner looks a rusty second choice rather than number one, and captain no less, for a team that is desperate to end their 15-year wait for some silverware.

Of course, Spurs have started the quest to secure Lloris' long-term replacement, but the hope was that they had the summer to make their move for a new goalkeeper. Many now believe that Spurs should accelerate their efforts to sign a new shotstopper this month rather than wait until the end of the season. Jordan Pickford, David Raya and Robert Sanchez are three rumoured targets for the club, though there is also a sense of missed opportunity at a failure to sign Mike Maignan, Lloris' long-term successor for the France national team, when it became clear he was leaving Lille on the back of their 2021 Ligue 1 title success.

That said, it's not just between the sticks where Spurs have struggled, but in defence they have been incredibly brittle. At the slightest bit of pressure, the backline crumbles, a far cry from the bedrock of Gianluigi Buffon, Andrea Barzagli, Leonardo Bonucci and Georgio Chiellini during ar Conte's disposal during his time at Juventus. It's no wonder Spurs have conceded two or more goals in 11 league matches this season; no team has done so more, that return level with promoted pair Fulham and Bournemouth, the latter destined for another relegation scrap.

Ultimately, the problems stem from the man at the helm, and Conte needs to shoulder a lionshare of responsibility. The Italian was aware of the setup when he joined in November 2021 and must have known what to expect from a chairman of Daniel Levy's ilk, the head honcho a tough negotiator in the market, and one who'll look to instead buy younger players with the aim of selling on further down the line for a huge profit. It's an odd-relationship when you consider Spurs are a project club with a must-win manager.

And yet Conte's rigidity and tactical inflexibility has started to hamper Spurs. Unless needs absolutely must, the Spurs boss has remained loyal to a 3-4-3 setup, yet this relies on world class players carrying out their respective duties to a world class standard. There are a number of top stars on the books at the club, yet not enough to stand by a system so steadfastly. Indeed, Spurs are conceding 14.3 shots per game, the fourth highest in the Premier League, and more than two of the three teams in the relegation zone - West Ham (12.1) and Southampton (12.3). There is not enough protection in front of a weak defence, and the team is really starting to suffer.

With just two weeks left of the transfer window, Conte can see he needs players to suit his demands and ensure a serious push for a top four finish in the second half of the season, as was the case last year, rectified by the game-changing additions of Rodrigo Bentancur and Dejan Kulusevski. Conversely, for Spurs to be putting in such limp performances with the players at Conte's disposal suggests that his methods are not up to scratch unless he has ample backing in the market, which just isn't the case at the Tottenham Hotspur Stadium.

In truth, it leaves the club at a bit of a crossroads. Levy can ill-afford to sack another manager and bring in another new man to oversee yet another rebuild. Conte has never been one to hang about at a club for long, yet with the relevant backing this month, he could feasibly turn Spurs' season around, just as he did in 2021/22 to guide them to a top-four finish. Conversely, if Levy does opt to remove Conte, there are a number of managers out of work that could step in to succeed the Italian.

Former Spurs man Mauricio Pochettino has unfinished business at the club, while Luis Enrique is another top-quality boss on the market. Should Levy elect to follow the former-Chelsea-manager approach once more, Thomas Tuchel is a free agent, so there are options. However, there would be a period of stagnation as the players get up to speed with their new manager at a time where some around them - Chelsea and Liverpool to name two - are struggling.

For all the good Conte has done, though, there are glaring issues within the squad that need addressing, be it through personnel, which can be corrected with the relevant backing in the market, or tactics, in which case the 53-year-old needs to earn his keep, so to speak. And so begins a vital two weeks in the recent history of Spurs where matters off the field will determine how the club performs in the second half of the campaign on the pitch. Strap in Spurs fans, it's going to be another bumpy ride. 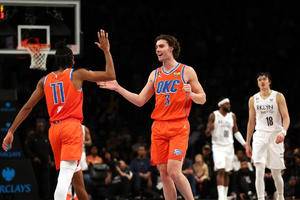 Aussie NBA stud Josh Giddey just keeps getting better — equalling his career-high for points with 28 against the Brooklyn Nets. Although it wasn’t an Aussie face off against Ben Simmons after the Nets guard was ruled out with back soreness, Giddey once again delivered a masterclass. Watch an avera Chelsea have confirmed the signing of Ukrainian winger Mykhailo Mudryk from Shakhtar Donetsk. Mudryk had been heavily linked with a January move to Arsenal, but the Gunners failed to agree a fee for the 22-year-old, who has put pen to paper on an eight-and-a-half year deal at Stamford Bridge. "Myk 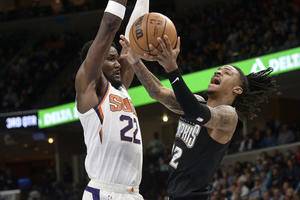 A quarter of the NBA season has passed since we last ran playoff bracket predictions, meaning a lot has changed when trying to look ahead to April. For starters, three brand-new teams have entered the playoff projections, and there's been a good deal of movement for the ones who remain in the posts

Why Arsenal are looking to trump Chelsea in race for RiceJa Morant calls out NBA after 7th drug test this seasonWhat next for Tottenham and Conte following North London Derby debacle?
Read More